You are here:
CoachingLeadership 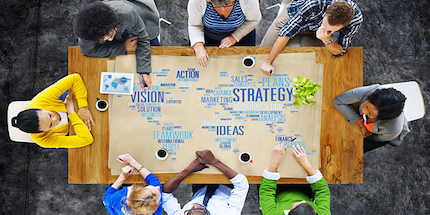 This Article Originally Appeared in the Sunday Business Post…

In the last 20 years people have begun to be seen as a resource rather than a cost, writes senior management specialist Georgina Corscadden. The challenge today is to align human resource management with business objectives.

The management of people used to be all about giving instructions and ensuring they were carried out. This ‘command and control’ ethos now gives way to a methodology that facilitates, empowers and motivates people to use their own skills and judgement within defined parameters. This harnessing of the real power of people brings enormous benefits provided it is done with a clear knowledge of where the business is going and what it wants from its people.

There has been dramatic development in the human resources function in organisations since the 1950s when personnel departments were mainly administrative. In the 1960s, the idea grew that a business had to have a social conscience and attend to the welfare of its staff. In the 1970s the buzz was ‘negotiation’ and in the 1980s, business began to recognise that people were a resource, though still with a cost factor. In this decade, all the previous developments, together with the changes in the competitive environment for business, have made people the new strategic weapon in the war against competition.

Smaller businesses can be slow to respond to these changes, particularly where the owner-manager – who may well have founded the business precisely so he or she could be in control – finds it difficult to let go some of that authority. But it is vital if the business is to have a chance of real growth that the emphasis in the management of people shifts from day-to-day activities to strategic goals. The owner-manager needs to plan and delegate.

While based in London last year, I carried out an in-depth survey into the human resources management of 40 randomly selected small businesses there with staff levels between 10 and 150. The survey showed that the majority of companies had severe problems of inadequate management structure, poor communication, insufficient attention to training, no clear roles for staff and the over loading of tasks on certain individuals while others had not enough to do.

In 80 percent of the companies, the owner was involved in all levels of management and in all decisions, frequently overriding the authority of others. Very few companies had any succession of planning and were totally reliant on the continuing good health of one or two key people. The majority of people did not know what the strategy of their company was. In most of the companies in the survey, there was little prospect of a dynamic career for anyone other than the owner-manager.

Problems like these inhibit the growth of small firms. The simple structure that was valuable in the beginning, the bucking of restraints that gave the firm flexibility, all turn into barriers to growth after a while.

The way out is to involve your people in the creation and implementation of a plan for the company’s future. This was the main feature of the minority of companies in the survey who did not have the problems mentioned above. Characteristics noted were the willingness of the management to listen, to ask for advice both within and outside the company, to put in systems that were challenging such as ISO 9000, and to put in place a selection of good human resource practices which were found to be appropriate to the business.

These frequently included organised induction for regular team briefings so everyone knew what they were aiming for and how they were to work together. In the better organisations, many of which were still owned by one person, everything was still linked to the priorities of the business which were well understood by everyone.

To understand the importance of motivation for other people, entrepreneurs should look into what motivates them. They are frequently willing to put in long hours, work extremely hard and endure a lot of stress, why? – Because it gives them satisfaction to be free to make decisions, make mistakes and achieve success. Employees who are well selected for their positions start off highly motivated but eventually become less so if they are not allowed use their own knowledge and given appropriate responsibility.

The survey found that the majority of employees had little responsibility, no clear idea of what was expected from them, were subject to competing pressures and had no standard rule for understanding priorities. The job of human resource management is to harness people’s abilities so they can be utilised appropriately to achieve the business goals. It is important therefore to have business goals and a clear idea of where the company is going in the medium to long term. This way, HR decisions which have a long term effect on the firm, such as recruitment, are guided by the overall business strategy. The right people will be employed, with the right abilities, and their training and progression can be mapped to coincide with the firm’s expected growth.

In choosing the appropriate HR systems to empower people, a firm will be led according to its own activity, age, size and level of formality. But there is no point in any firm trying to ride out the difficulties being caused by the current business environment. What the western world is going through right now is not like a recession, it is a revolution. If firms do not change appropriately and use effective human resources they will not be able to grow and develop. They may not even survive.

In looking at how you can best use your people’s ability it is important to first develop a strategic view of where the company is going and what it needs. Then review your existing staff and their skills to see where the shortcomings are.

Take a coherent approach to the design and use of HR management systems. All new employees must be taken on with a clear understanding of where they fit into the strategic plan and they should be properly integrated into the company with a formalised training and induction process. I know that small firms hate anything that restrains them but a good system is a help and not a restraint. There have to be procedures and plans for training now and in the future. There has to be a formal means by which people can informally discuss the current needs and problems of the business and learn how to make decisions based on a recognised set of priorities. Annual appraisals motivate staff by giving a true reflection of how they are preforming in different tasks.

It is when all the people working in a firm share the same vision that they can truly work as a team to achieve their strategic goal.

We use cookies on our website to give you the most relevant experience by remembering your preferences and repeat visits. By clicking “Accept”, you consent to the use of ALL the cookies. However you may visit Cookie Settings to provide a controlled consent.
Cookie settingsACCEPT
Manage consent

This website uses cookies to improve your experience while you navigate through the website. Out of these cookies, the cookies that are categorized as necessary are stored on your browser as they are essential for the working of basic functionalities of the website. We also use third-party cookies that help us analyze and understand how you use this website. These cookies will be stored in your browser only with your consent. You also have the option to opt-out of these cookies. But opting out of some of these cookies may have an effect on your browsing experience.
Necessary Always Enabled
Necessary cookies are absolutely essential for the website to function properly. This category only includes cookies that ensures basic functionalities and security features of the website. These cookies do not store any personal information.
Non Necessary
Any cookies that may not be particularly necessary for the website to function and is used specifically to collect user personal data via analytics, ads, other embedded contents are termed as non-necessary cookies. It is mandatory to procure user consent prior to running these cookies on your website.
Analytics
Analytical cookies are used to understand how visitors interact with the website. These cookies help provide information on metrics the number of visitors, bounce rate, traffic source, etc.
Performance
Performance cookies are used to understand and analyze the key performance indexes of the website which helps in delivering a better user experience for the visitors.
Advertisement
Advertisement cookies are used to provide visitors with relevant ads and marketing campaigns. These cookies track visitors across websites and collect information to provide customized ads.
Uncategorized
Undefined cookies are those that are being analyzed and have not been classified into a category as yet.
Save & Accept